This guide and this site are migrating to a new domain! You can continue to read the guide, and read any updates to it, at http://www.thegharstation.com/2016/11/07/planar-fragments-a-brief-guide/

In Starfall Prophecy, one of the new gearing and progression mechanics is known as “Planar Fragments”.  This system started out as a way to replace tertiary stats such as critical hit rate, attack/spell power, crit power, etc. on gear.  Thus, your gear would work for both tank and dps/heal roles, and you would just swap your planar fragment sets depending on your role.

This is still true, but the system has gotten more… complex since this initial pitch.  Today I would like to take some time to delve into the system and help explain it.
Overview of equipment window

This is the first thing you will see when going to equip planar fragments, a new equipment window, and a new inventory on the right.  Simply click on a slot, which has a specific element marker on it, then click and drag a fragment from the right to a slot to equip it.  This might look overwhelming at first, so let’s dig into each portion of this piece by piece.

Planar Fragments have their own inventory system separate from your bag space.  You may carry 200 fragments here.  You can easily move fragments to your bag space by clicking and dragging them to an empty slot in your inventory.

You can access this panel by clicking on “Fragment Inventory” in your character panel. 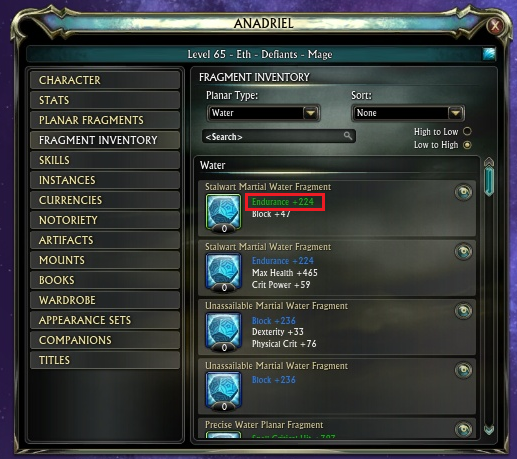 The inventory is sortable, and searchable, and details each of your planar fragments with a very quick glance.  In the above image, I have highlighted the primary stat of the fragment. 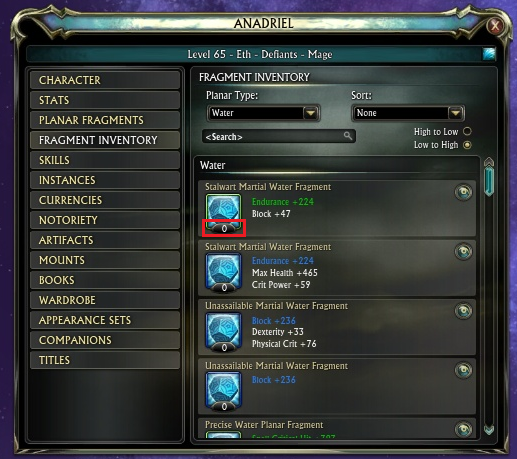 The fragment’s infusion level is displayed below it.

Finally, you can recycle fragments straight from your inventory.

This is an “Uncommon” (green) quality fragment, so it comes with 1 secondary stat when it drops.  It contains Endurance and Block, clearly this is meant for tanking.

This one’s name contains the word “Martial”, indicating that it is a physical class fragment, perfect for Warriors, Rogues, and Primalists.  A matching “Mystical” phrase exists, meaning the fragment and its potential stats are meant for a Cleric or Mage. 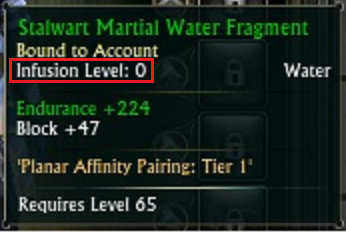 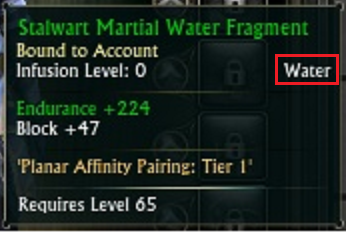 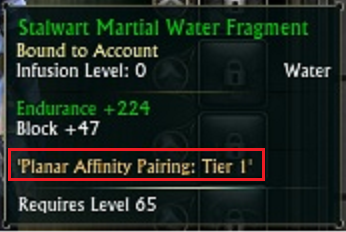 A fragment’s Tier rating goes from 1 to 6, with 1 being the best possible for that element, and 6 being the worst.  In short, you want to seek out Tier 1 fragments, since the primary stat for that fragment will be the highest compared to all other fragments of the same infusion level.  Tier 6 fragments have the worst primary stats, and are better off being recycled.

Here are the stats in order of best to worst for each planar type:

This is the Infusion window.  Here you can upgrade the primary stat of your Planar Fragments, and cause it to gain additional secondary stats.  It can take multiple infusion attempts to level up a fragment, but there is a hard limit on how many times you must do this.  There is also a chance of a “Critical Infusion”, which will level up your fragment immediately, regardless of the infusion progress.

To infuse a fragment, click the “Up Arrow” next to the fragment once it has been equipped.  This will add open up the infusion window.

Each infusion costs some resources.  Plat is a constant requirement for all levels, but in addition to plat, infusion require planarite from levels 0-6, and special “Cosmic Core” items from levels 6 through 15.  Cosmic cores can be obtained by recycling fragments, which will be discussed later.

Starting an infusion is as simple as pressing the infuse button.  This will immediately take the currency and required materials from your inventory, and give you one of two results.

1) The first possible result is a “Critical Infusion”.  This means that any remaining progress to the next infusion level is automatically completed.

2) Alternatively, you will gain progress towards the next infusion level.  Note in this example, the fragment has moved to level 9 and acquired a new secondary stat.

As we can see, infusion is rather simple.  The costs can be high, especially for cosmic cores, which brings us to the next idea for fragments: Recycling.

If you obtain a fragment that you don’t want, or has undesirable stats, you have the option of Recycling that fragment.  This is done by clicking on the Recycle button in any of the planar fragment lists you find in your inventory.  Recycling a planar fragment awards you with “Cosmic Core” items related to that fragment’s element.

Recycling can also be done using the new Recycling Skill in you skills window.

This skill can be put on your hotbar, and used as macro.  It is required to recycle fragments in your bag inventory. 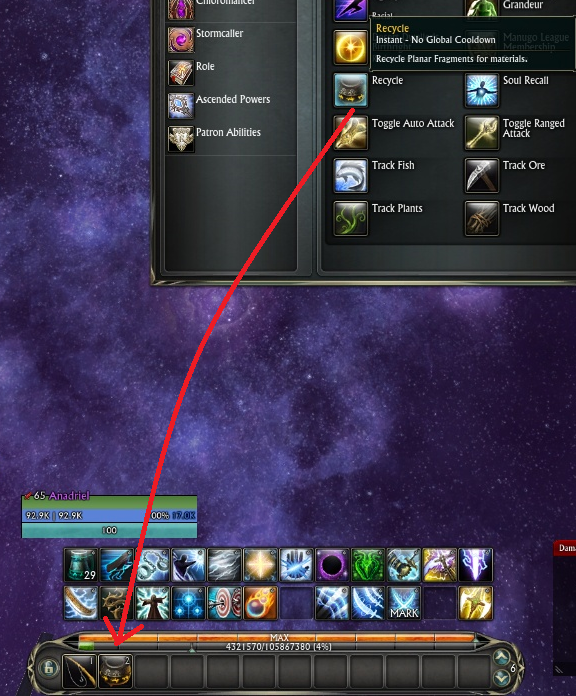 Using the skill is easy, like all the current break down crafting skills in the game.  Use the Recycle skill, then click on a fragment in your bags or in the Fragment Inventory panel of your character page.

You can assign images to a set by right clicking it.

You can drag the icon to your hotbar for easy set swapping.

Recommendation for what to equip and what to recycle
Fragments come in all rarity levels, but always at infusion level 0.  The rarity of a fragment determines how many secondary stats it starts with.  This means that higher rarity fragments have less RNG than lower rarity ones.

You should avoid playing the RNG game with fragments.  A quick overview of what levels to infuse to for each rarity is below.  After the listed levels, RNG starts kicking in very hard and you might end up with unwanted secondary stats.

On top of this, you want to avoid high-tier rated fragments.  Tier 1, 2, and 3 fragments will give you the best potential primary stat for that fragment’s element, but a 4, 5, and 6 Tier will be sub-par.  It is generally best to recycle Tier 4, 5, and 6 fragments.  Do the same for a Tier 3 unless you really need to stack the stat provided by that fragment.